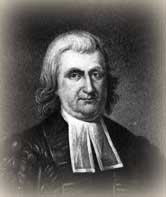 Princeton tried hard to acquire John Witherspoon as president of their college. Witherspoon, a Scottish preacher, had a large and successful ministry in his homeland and was reluctant to leave it for the new world. His wife was even more reluctant. It took the persuasion of Benjamin Rush to get her to agree to the move. Finally Witherspoon made the decision and gave his assent. He sailed for America and stepped into history as the sole clergyman to sign the Declaration of Independence.

His welcome at the college was all he could wish. In every window of Princeton’s Nassau Building lamps were lit and shone across the countryside for miles. On this day, August 17, 1768, the godly man was sworn in. His inaugural was simple, consisting not even of a speech. He simply took his oaths before the board. He did not give an inauguration address until a month later. By then he had discovered something the negotiators had not told him: the college was in financial chaos. The trustees even had to borrow money to meet his salary.

Witherspoon was a man of presence and of great energy. Perhaps only George Washington commanded more respect than he in that day. With the decisive action that characterized him, he soon put the school on a firm financial footing.

America revolted from England. Witherspoon was no stranger to rebellion. Years before, when the “Pretender” landed in Scotland, Witherspoon had led a militia to join the Royalists who resisted the “Pretender”. Captured by the enemy forces, he was imprisoned. If in Scotland he sided against the insurgents, in America he joined them. His voice was so influential that Horace Walpole commented, “Cousin America has eloped with a Presbyterian Parson.” He was a delegate to the Continental Congress and served in the New Jersey legislature.

Witherspoon did not neglect his school duties for politics nor let down his spiritual standards. From the very start he emphasized that Christ would be the center of education at Princeton. {Wonder what he would say now} He taught its strict Calvinist theology (and whatever other classes were needed). He added French, history, international law, philosophy and speech to the college curriculum. Of the 478 graduates he trained, many rose to occupy high offices. This man who had learned to read at four and who was strong in Latin, Hebrew, and Greek at 13, proved a capable educator.

During the American Revolutionary War, the college was kept afloat only by his perseverance. Both friend and foe ransacked the buildings.

John Witherspoon’s life was not all roses. He suffered from insomnia and over-sensitivity to smells. After his capture by the “Pretender” he became nervous and expected to die at any time. The girl he first proposed to refused to marry him although she wrote him letters the rest of her life.

Starting Over »
« Does God Condemn Debate?