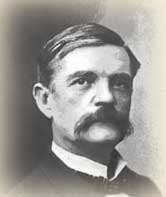 Samuel P. Jones knew what drink could do to a man and his family. He began drinking as a young man when his father’s absence left him acting as head of the family. He thought liquor would ease his nervous indigestion.

In 1868 Sam married Laura McElwain. He had become a lawyer and hobnobbed with other hard-drinking men. Within four years, alcohol and gambling had brought him, his family and children to ruin. He moved from place to place and finally was reduced to shoveling coal for twelve hours a day.

While on a six-week drinking binge, he learned that his father was dying. He staggered to the bedside where his father pleaded with him to meet him in heaven. Sam promised. Afterward, he begged a drink from a bar tender. Suddenly he saw his vomit-covered reflection in a mirror. He smashed the glass and fell to his knees, begging God for mercy. After three days of strong coffee, he cleaned up, bought new clothes and went home to the wife he had beaten black and blue.

“‘Honey, God has given you a new husband and the children a new daddy, and I wonder if you will forgive me and start all over again.’ She grabbed me in her arms and cried, ‘Hallelujah! Hallelujah! I have been praying for this!’ And,” Sam added, “I have been going round the country bragging about Jesus ever since.”

He preached his first sermon a week later. With “a wife and one child, a bobtail pony and eight dollars in cash” he set out as a Methodist traveling preacher. Over the years, he stayed sober and his reputation for humor and straight talk grew. Once a saloon keeper flourished a ten dollar bill under Sam’s nose, saying he bet he’d like the money. Sam snatched the ten dollars, saying the devil had had it long enough. Another time, he heard some preachers praying that he’d have more tact. Sam prayed aloud, “Lord, I hope you won’t listen to a one of these preachers. They don’t preach against sin. They don’t visit from door to door. They don’t weep over sinners, and they don’t win souls. And they want You to change me until I’m just like them.”

In the last years of his life, he preached almost daily to audiences of 10,000 and more. It is estimated he turned 500,000 people to Christ. One of his converts, Captain Tom Ryman, built him a tabernacle to preach in; it became the Grand Ole’ Opry.

On this day August 2, 1885, Sam preached a typical sermon to 12,000 people in a camp-meeting near Cincinnati, Ohio. Standing on the top of an old piano box, he took as his text Proverbs 11:19. As righteousness leads to life, so he that pursues evil, pursues it to his own death.

Sam scoffed at preachers who preached a bad man into heaven. “There is but one moral way in the universe of God, and every man in Kentucky is on that way. Heaven is at one end of the road–hell at the other, and the only question is which direction shall you go. A man on his way to hell, if he thinks a minute, and will turn around right on the road he is on, he is in the road to heaven; if he is on the way to heaven and turns around in that way he is in, he is on the road to hell in less than fifteen seconds…”

No one ever changed Sam. To the end of his days, he insisted true religion was to turn from evil and do good. “Just quit your meanness and follow along in the footsteps of Jesus Christ,” he said. However, he did quit preaching for a while. He had preached so hard and so often that his health failed and he needed to take a rest. But he went back to preaching as soon as he could. Returning from preaching in Oklahoma City, he complained he wasn’t feeling well, took a drink of water, and flopped over dead.