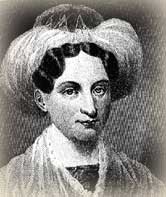 Mary Lyon was blessed with an inquisitive mind and a sturdy Christian upbringing. Born in 1797 in western Massachusetts, the sixth of eight children, Mary’s Christian roots went back to the earliest days of the colony. Although raised on a poor farm –her father died when she was just five–Mary grew up learning the skills necessary for a girl of her day–spinning, weaving, sewing, and farming and acquired a thirst for knowledge, especially in mathematics and the sciences.

She ferreted out opportunities to learn, as for example, studying geology through questioning a visiting geologist and then making her own observations. A willing worker, she kept house for her brother when her mother remarried. In her teens she taught younger children, saving her money to be able to continue her own education. (At 20 she earned 75¢ a week plus board). Often she would snatch just four hours of sleep a day between work and study.

One of the schools she attended was operated by Rev. Joseph Emerson. He actually “talked to ladies as if they had brains.” In an age when women were thought to have second rate minds, this was a real boost for Mary’s morale. Even more helpful was Emerson’s encouragement for her to open a school of higher learning for women.

Mary’s vision was to provide affordable schooling for common people. One way to cut costs would be to have the students themselves do as much of the domestic work as possible. The underlying purpose, however, was Christian. She wanted to infuse her pupils with a missionary spirit and a sense that they ought to live their lives for God wherever his providence might send them.

With contributions from Christian backers, Mary opened Mount Holyoke Female Seminary in South Hadley, Massachusetts on this day, November 8, 1836. It is the nation’s oldest college for women. Mary insisted the school not be named after her, so it was named for a nearby mountain peak. Its motto was Psalm 144:12, “That our daughters may be as cornerstones, polished after the similitude of a palace.”

Holyoke’s curriculum was rigorous, including science, mathematics, history, and theology. Mary Lyon served as principal for the first twelve years, establishing a model of excellence and Christian living for the students. Her chapel lectures from Proverbs as well as her other addresses to the young women were full of timeless spiritual advice and practical applications. Though a plain person, Mary always spoke with conviction and magnetism–her radiant personality shining through her plain exterior.