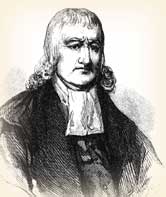 Which church should it be? John Henry Livingston believed that God was calling him to leave his law studies and become a minister; but of which denomination? Born in New Netherlands (New York) thirty years before America’s revolutionary war, it seemed to him that he had three options: Anglican, Presbyterian and Dutch Reform. Of the three, the Dutch church seemed the least likely. He knew less Dutch than English and the church was tearing itself apart with quarrels.

But the Dutch Reform was the church of his grandparents and he had been brought up in it. He longed to do something to heal its wounds. “…It was powerfully impressed upon my mind, that God would render me…an instrument in his hand to compromise and heal these dissensions, and raise the reputation, and establish the dignity and usefulness of the Dutch Church in America.”

And so twenty-year-old John sailed to Holland to get his theological degree. Hundreds of prayers went with him, for America’s Dutch settlers knew the hopes that this sickly boy carried with him of settling divisions between them and the home country. They hoped he would succeed and make his way back to minister to them.

John did well in his studies. After his graduation, he returned to America in 1769. For the rest of his life, he worked hard for the Dutch Reform Church in the New World. In fact, he did so much for them that he became known as the “Father of the Dutch Reformed Church” in America. He negotiated peace between rivals in America and worked out a measure of independence for the American church, which was still ruled from Holland. (After the Revolutionary War, it became completely independent.)

John pastored in several cities in New York, always seeking positions that would allow him to be of the most use. During the revolutionary War, he had to leave New York City because the British occupied it. When he returned in 1783, he was the only Dutch Reform pastor in the city; three other pulpits were vacant. This meant he carried a huge work load.

The load was about to increase. The Dutch Reform appointed him to an additional task. On this day, October 5, 1784, John Henry Livingston became their Professor of Theology. For twenty-six years, he carried out these duties without any college to back him up. In addition to this, he wrote hymns, contributed to the church constitution, prepared its liturgy (form of service), backed missionary endeavors, and Chaplained the U. S. Congress.

He was helped by a good wife. Sarah brought common sense, love, and piety to the marriage. When she died in 1814, he was heart broken. He wrote to a friend, “This day her dear remains are to be deposited in the silent grave. — I do not love my blessed Jesus any thing less for afflicting me. He is now very precious to me. All my springs are in Him. He stands by me, and strengthens me. It is the Lord. He hath taken away, blessed be his name, notwithstanding. — It is the heaviest stroke I have ever received; but it is well. — In the Lord I have righteousness and strength.”

By the year of Sarah’s death, John had been living for four years in New Jersey. In 1810, the General Synod of the Reformed Church decided to combine its theological training with Queens College (now known as Rutgers) in New Brunswick, N. J. They made Dr. Livingston the president of the college. The hard-working John served as its professor and president until he died in 1825. 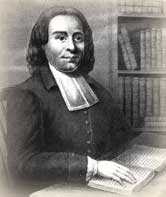 The punishment of fools is folly – Proverbs 14:24

Every natural man is a fool. – Thomas Granger

Honor is as fit for a fool and a gold ring for a swine’s snout. – John Trapp

A hearer’s life is the preacher’s best commendation. – Thomas Manton

A minister without boldness is like a smooth file. – William Gurnall

Check out our Faithful Steward Ministry Facebook page and Dr. Martyn Lloyd-Jones excellent, “Walking with God”, daily devotional. The topics are
SPECIAL AUTHENTICATION and WHAT TO PRAY FOR IN REVIVAL

My preaching was not with enticing words of man’s wisdom – 1 Corinthians 2:4

We are not fraudulent hucksters of God’s message – 2 Corinthians 2:17 (Weymouth)

He that is more frequently in his pulpit to his people, than he is in his closet for his people, is but a sorry watchman. – John Owen

These vain-glorious preachers may be like Rachel, fair, but their ministry is like to be barren. – William Gurnall

But it displeased Jonah exceedingly, and he was angry. And he prayed to the Lord and said, “O Lord, is not this what I said when I was yet in my country? That is why I made haste to flee to Tarshish; for I knew that you are a gracious God and merciful, slow to anger and abounding in steadfast love, and relenting from disaster. Therefore now, O Lord, please take my life from me, for it is better for me to die than to live.” (Jon. 4: 1– 3)

Dear Jesus, you’re stirring my heart today to pray for weary men and women serving in the ministry of the gospel. I wish it weren’t so, but sometimes it takes my own challenges and hardships in ministry for me to hit my knees with compassionate intercession for others. Before your throne of grace, I bring you missionaries, pastors, elders, counselors— a wide range of friends you have called and gifted to share and apply the gospel of your grace.

Many of them are living Jonah’s story. In their heads they still know you to be a God who is gracious and compassionate, slow to anger and abounding in steadfast love. But in their hearts they are displeased and angry, disconnected and disillusioned, and some, like Jonah, aren’t sure they want many more days in this world. Have mercy on them, Lord; have great mercy today.

Jesus, you know all the issues. You know what’s under the anger; what’s compounding the contempt; and what’s fueling the flight. Meet these dear servants of yours right where they are. I pray for their spouses and children as well, for sometimes it’s the family members who suffer ministry pangs the most.

Comfort them with your compassion. Grant them a renewed perspective of eternity. Rekindle hope in their hurting hearts. Where needed, may your kindness drive them to appropriate repentance. Refresh them with whatever means of grace you choose.

Until you return, Jesus, Satan will continue to mount an all-out assault against you by attacking your bride, and especially those called to nourish and prepare your church for the great wedding day. Satan knows he’s lost us for eternity, so he will do anything and everything within his power to bring havoc, heartache, and hell. Use us, however you choose, to encourage your servants, and all the more as we see that great day approaching. We pray in your holy and loving name. Amen.