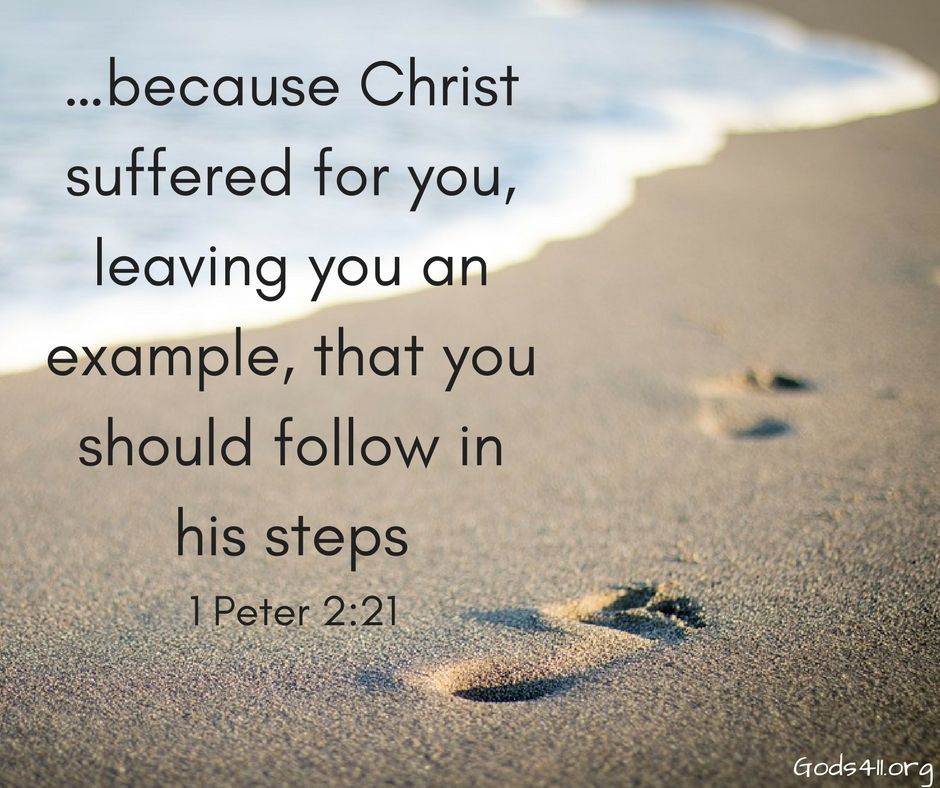 For [as a believer] you have been called for this purpose, since Christ suffered for you, leaving you an example, so that you may follow in His footsteps. (AMP)

The word follower has so many meanings. It can be used to describe someone who literally trails behind another, someone who adheres to the principles of another, one who beys or worships another, a disciple of a system, a companion or friend and a few others. The second meaning in Websters 1828 dictionary has the best application to verse 21: One that takes another as his guide in doctrines, opinions or example; one who receives the opinions, and imitates the example of another; an adherent; an imitator. So we are to imitate Jesus, but how so?

The Apostle Peter under inspiration of the Holy Spirit, tells us a great deal about the character of Jesus while he was on earth in the next two verses of Chapter 2 (1 Peter 2:22-23 ). These traits that we are to follow included:

Despite what many today profess to know about following Jesus, true followers always turn to the Word of God for His examples to live by not the examples man thinks He would live by today.

Today’s Study help is Alexander MacLaren’s Expositions Of Holy Scripture on 1 Peter 2:21. * Note it is long so follow the link at the end to continue reading 🙂

These words are a very striking illustration of the way in which the Gospel brings Christ’s principles to bear upon morals and duty. The Apostle is doing nothing more than exhorting a handful of slaves to the full and complete and patient acceptance of their hard lot, and in order to teach a very homely and lowly lesson to the squalid minds of a few captives, he brings in the mightiest of all lessons by pointing to the most beautiful, most blessed, and most mysterious fact in the world’s history–the cross of Christ. It is the very spirit of Christianity that the biggest thing is to regulate the smallest duties of life. Men’s lives are made up of two or three big things and a multitude of little ones, and the greater rule the lesser; and, my friends, unless we have got a religion and a morality that can and will keep the trifles of our lives right there will be nothing right; unless we can take those deepest truths, make them the ruling principles, and lay them down side by side with the most trivial things of our lives, we are something short. Is there nothing in your life or mine so small that we cannot bring it into captivity and lift it into beauty by bringing it into connection with saving grace? Christ also suffered for us, leaving us an example. This is the first thing that strikes me, and I intend it also by way of introduction. Look how the Apostle has put the points together, as though there are two aspects which go together and cannot be rendered apart, like the under side and the upper side of a coin. ‘Christ also suffered for us,’ and so for us says all the orthodox. ‘Leaving us an example’–there protests all the heretics. Yes, but we know that there is a power in both of them, and the last one is only true when we begin with the first. He suffered for us. There, there, my friends, is the deepest meaning of the cross, and if you want to get Christ for an example, begin with taking Him as the sacrifice, for He gave His life for you. Don’t part the two things. If you believe Him to be Christ, then you take Him at the cross: if you want to see the meaning of Christ as an example, begin with Him as your Saviour. ‘Because Christ also suffered for us, leaving us an example that ye should follow His steps.’ These are the words, and what God hath joined together let no man put asunder. With these few remarks I shall deal with the words a little more exhaustively, and I see in them three things–the sufferings of Christ our gain, the sufferings of Christ our pattern, and the suffering of Christ our power to imitate… Continued at Source