How we view the world, that is objectively look at and consider all that is happening around us shapes all our actions. – Mike 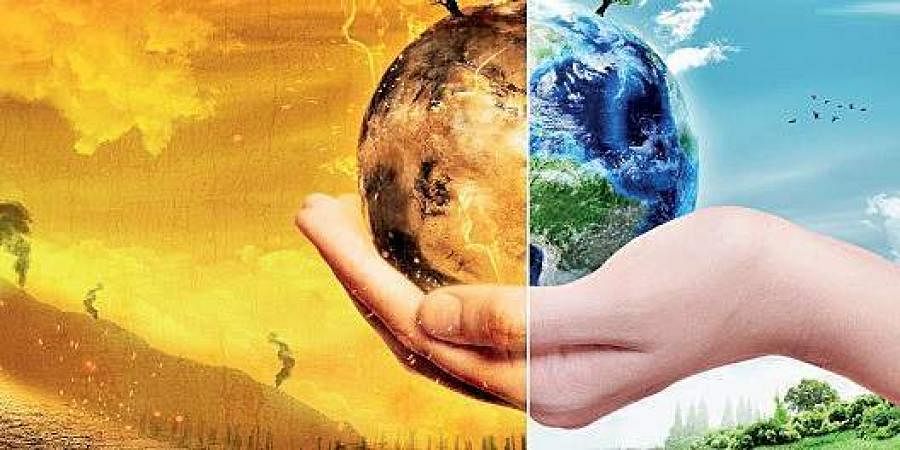 The above picture is from an article in the New Indian Express dated 26th April 2020, with the title The world to end in 30 years? Within the opening paragraph is the only substantial evidence if one can call it that to support the headline; An Australian think-tank has predicted that human civilization as we know it will come to an end in 2050. The end is indeed nigh. The picture more than the doom and gloom of the article got me thinking about how two people can look at the same thing and see something completely different all because their worldviews are not based on the same ideals.

Literally, of course, worldview is how a person views the world. A person’s worldview consists of the values, ideas, or the fundamental belief system that determines his attitudes, beliefs, and ultimately, actions. Typically, this includes his view of issues such as the nature of God, man, the meaning of life, nature, death, and right and wrong. – Focus on the Family

In the “world”  we have six main Worldviews (see Ligonier Article below) predominant today apart from a Biblical or Christian Worldview. The bible however only teaches us two worldviews; God’s and man.

With so much stuff out there, (much of it junk) it is SO IMPORTANT for anyone claiming to be a “Christian” and for those learning about Christianity to understand what a True Biblical Worldview is.

I have attached some articles to help:

Biblical Worldview – From a bible study I conducted back in 2010

“Why do so many Christians not have a consistently biblical worldview?” – GotQuestions.org

What Is a Worldview? – Ligonier Ministries

Is a Biblical Worldview Optional? – Answers in Genesis

How a Biblical Worldview Shapes the Way We Teach Our Children – Dr. Timothy Jones

How Your Theology Shapes Your Worldview – Michael Horton

The Importance Of A Biblical Worldview  – Allen Turner

As most of you know I have never been a big pro-football (go Slingo Rovers) fan. I have not watched a game since before Colin Kaepernick’s unpatriotic stunt a few years back.

However, I do feel that for good or bad NFL players are role models and as such it is our duty to point out when they err against God. Not with name calling and false accusations of bigotry and racism but with the loving kindness that the bible calls for. Like wise should note when they are doing the right thing and not be afraid to be supportive and speak out. – Mike

Thoughts on a Faux Controversy

“Controversy erupts around Drew Brees,” proclaimed news outlets on Friday, the very same news outlets who erupted the controversy engulfing one of the NFL’s best quarterbacks.

Here’s the story: In a short video, Brees encouraged students to participate in Focus on the Family’s “Bring Your Bible to School” project. He never once mentioned anything about sexual orientation or gender identity since, well, that’s not what Bring Your Bible to School Day is all about. To my knowledge, Brees has never spoken publicly on LGBTQ issues. He really didn’t clarify his views even on Friday, when he was forced to respond to the “erupting controversy.”

Perhaps Brees hasn’t talked much about LGBTQ issues because, again, he’s a football player, and that’s not what football is about. Or perhaps he’s realized, as a public figure who is also a Christian, what would happen if his views were revealed as anything less than a full-throated endorsement of the new sexual orthodoxy.

Either way, Brees seemed honestly surprised by his presumed guilt simply because of a connection to this Focus on the Family project. That in and of itself is a lesson for all of us.

Friday’s Washington Post article on Drew Brees is a case in point. Widely assumed by many, especially by Allyson Chiu in the Washington Post piece, is that even associating with anyone who holds less-than-affirming views on LGBTQ issues is no longer acceptable, even if the association is completely unrelated to LGBTQ issues in any way. No argument was offered by Chiu or any other critic as to why this is now the case. It was almost as if no argument was necessary.

That’s more than a little frustrating, because as one blogger noted recently, any movement that spends years trying to shut down a Denver bakery and discredit a chicken sandwich restaurant is a movement that has, long ago, run out of real injustices to fight. This second-degree-of-separation guilt-by-association campaign against Brees indicates that the gatekeepers of the LGBTQ movement have moved on, and are now demanding that everything, and I mean everything—from football to business to education to politics to Stranger Things—has to be about this.

As Focus on the Family Jim Daly demonstrated so well in his response to this nonsense, Christians should resist the demand to frame every issue of life and culture around LGBTQ issues. There’s so much more to life than this.

It’s strange that Christians are constantly being asked why we spend so much time talking about sex. But we aren’t the ones turning reality upside down, making this the one issue that every other issue has to be about.

On the other hand, as Mr. Brees found out, we won’t always be able to sit this one out. If you are even perceived as being on the “wrong side of history,” it may not matter how nice you are.  That means that in this time and in this place, we’ll have to be ready to speak to those issues when appropriate or unavoidable.

Christians, what time is it? It’s post-sexual revolution, a time in human history in which nearly everything about life and our life together, from our understanding of right and wrong to our understanding of what it means to be human, has been reimagined along the lines of sexuality.

If you were Drew Brees, targeted because of a completely unrelated story about your opinion on homosexuality or gender, what would you say? Too many Christians are unprepared for the tough questions that, like it or not, are inevitable in this time and this place.

But there are answers. And last week, the Colson Center launched a new video series to help. It’s called “What Would You Say?” and it provides understandable, repeatable, and convincing answers to the hardest cultural questions.

New videos will be posted every week at WhatWouldYouSay.org.