For most of our defense infrastructure, major investment is overdue. The Navy’s four public shipyards are a clear example. They are all over 100 years old, and they are falling apart…

SOURCE: If Congress Wants to Invest in Infrastructure, It Should Focus on Defense 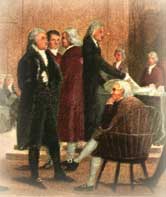 In 1787 a convention in Philadelphia drafted what is usually recognized as the most extraordinary political document of history. The Constitution of the United States created a federal system with checks and balances on power. The world had never seen anything like it.

Despite its benefits, there was doubt it would be ratified by the individual states. Having recently escaped one tyranny, the people of the United States did not want to subject themselves to another. They feared the new constitution because, while it specified the rights of the new government, and gave such rights as the writ of habeas corpus, it did not list other rights that the people felt it should. These could be inferred, but the majority of Americans felt safer having them spelled out.

For the most part, those who were for the federal system were for the constitution as it stood. Those who opposed a federal system, wanted more guarantees of rights. Several state conventions asked for such a bill. Thomas Jefferson urged that they be given their wish. A “bill of rights is what the people are entitled to against every government on earth, general or particular, and what no just government should refuse, or rest on inference.” The U. S. Congress agreed and by a two thirds majority passed ten amendments to the constitution, called the Bill of Rights.

On this day, December 15, 1791, the Bill of Rights was ratified. It is significant to church history because of its first Amendment: “Congress shall make no law respecting an establishment of religion, or prohibiting the free exercise thereof..” This amendment was the result of long centuries of efforts by religious groups such as the Quakers and Baptists to obtain religious liberty.

Federal civil rights are not obligatory for states, however. At the state level, established churches continued to exist for some years.

Many battles have been fought in the courts over just what this amendment means. Today, when its words are used as an excuse to forbid children to pray in school or read a Bible on school property, it is good to remember that in the understanding of the generation that adopted the amendment was not that the government should oppose religion or deny it the same rights of expression enjoyed by other organizations, but rather that it not impose a national religion nor stop people from engaging in their preferred form of worship. It guaranteed freedom for worship, not freedom from religion.