The climate is the most complex system on Earth. Is it really possible to project with any precision what it will be like 20, 40, or even 100 years from now? Steve Koonin, former Undersecretary for Science in the Obama Administration, challenges the confident assumptions of climate alarmists.

…Perhaps, we should apply that historical knowledge to today’s crises. What if the kids and their carbon outputs aren’t the problem to be solved, but instead the very ones to solve whatever climate change problems we face?…

In a recent article in The Atlantic, Emma Green writes that “a third or more of Americans younger than 45 either don’t have children or expect to have fewer [children].” This is, of course, not really new news. Birth rates have been falling for years, for various reasons. What’s notable in Green’s article is the somewhat new reason younger Americans claim they are choosing childlessness: because they are “worried about climate change.”

Last week, President Joe Biden visited New York to survey the devastation from Hurricane Ida. During his press conference, the president referenced a recent U.N. report that tracks climate change. According to the report, “Global surface temperature has increased faster since 1970 than in any other 50-year period over a least the last 2,000 years.” Not surprisingly, Biden used his remarks as an opportunity to advocate for expansive, big-government climate policies, claiming that worsening weather patterns merit a wide-ranging, government-led approach.

The Q & A audio clips below highlight a discussion between Stand in the Gap Today hosts Isaac Crockett, Sam Rohrer, Gary Dull, and guests, Pastor Matt Recker, and Micah Johnson. Both guests minister in the heart of New York City and talk about what it’s like to evangelize and make disciples in an urban environment.

Why are young people so accepting of fake news and issues like climate change or socialism? Listen Here (3:23) >>

Practical advice for Pastors on how to speak about the cultural issues of our time.  Listen Here (2:37)>>

Pastor Recker discusses the power of prayer in his ministry. Listen Here (3:36)>> 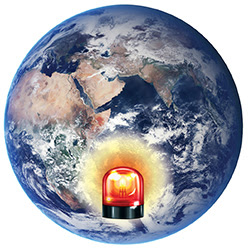