Songs from a Bed of Pain 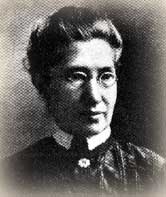 Can there be a purpose in a crippling ailment? Eliza Hewitt may have wondered that.

Eliza was born on this day, June 28, 1851 in Philadelphia, Pennsylvania. Educated in the local school system, she graduated as valedictorian of the Girl’s Normal School that she attended. She became a teacher in the public schools of her city.

But then came misery. Her career screeched to a halt when she was forced to bed with a painful spinal problem. (One of her descendants has contacted us and said her debilitating condition was caused by an reckless student striking her with a piece of slate.) Lying in bed, she could have been bitter. Instead, she studied English literature and began to sing and write:

Sing the wondrous love of Jesus; sing his mercy and his grace.
In the mansions bright and blessed he’ll prepare for us a place.

Some of her lines came into the hands of Professor John R. Sweney. He wrote her asking for more, and set a few of her songs to music, including one of the better known: “Will there be any Stars in My Crown?” He and William J. Kirkpatrick published her first hymns.

We remember Eliza Hewitt today because of those hymns. Had she never been bed-ridden, she might not have written them. Among the best known are, “Give Me Thy Heart, Says the Father Above,” “When We All Get to Heaven,” “Sunshine in My Soul,” “Will there be any Stars in My Crown?” and “More About Jesus Would I Know.”

Later Eliza’s well-being improved, although she suffered re-occurrences for the rest of her life. Despite her health problems, she was deeply interested in Sunday school work, and superintended a Sunday school for the Northern Home for Friendless Children. This was followed by similar work in the Calvin Presbyterian Church. At one point, she had a class of 200!

Ms. Hewitt could have chosen to let her ailments, her personal misery dictate and define her life instead she rose up and praised God writing songs for the Kingdom of God and His Glory. Here is one of her works performed by a traditional choir.  – Mike

1 “Give Me thy heart,” says the Father above,
No gift so precious to Him as our love;
Softly He whispers, wherever thou art,
“Gratefully trust Me, and give Me thy heart.”

2 “Give Me thy heart,” says the Savior of men,
Calling in mercy again and again;
“Turn now from sin, and from evil depart,
Have I not died for thee? Give Me thy heart.” (Chorus)

3 “Give Me thy heart,” says the Spirit divine,
“All that thou hast, to My keeping resign;
Grace more abounding is Mine to impart,
Make full surrender and give Me thy heart.” (Chorus)