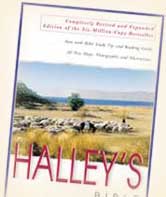 Your church library probably has a copy and you, too, may own one, because well over a million copies of Halley’s Bible Handbook are in print.

Henry H. Halley, the author of the handbook, was born on this day, April 10, 1874. He was ordained as a pastor in 1898, but had to leave the pulpit for a time because of ill health. During this enforced time off, he memorized large portions of Scripture. (Eventually, he memorized the gist of every book of the Bible.)

The idea of the handbook came almost by accident. One day he was invited to preach at another pastor’s church. He forgot to bring his notes. What should he do?

He decided to recite some of the Scripture he had memorized, linking together related passages. The audience loved it. They invited him back to recite more passages. Other churches also invited him. Before reciting a passage, he always gave an explanation of its context. People tried to jot down what he said. One pastor even went so far as to hire a stenographer to take notes.

Henry found her typing and shuffling so distracting that he made up his mind to hand out his own notes. The first notes were only sixteen pages long. But as he added more, the handouts grew and grew. By his 90th birthday, they amounted to almost a thousand pages! The Handbook was now a published work on sale in bookstores. And it sold well.

Its popularity was owing not only to its usefulness–it featured maps, outlines of Bible books, archaeological discoveries and much more–but to the honor it accorded to God. Halley emphasized that the Bible is God’s word. And he recognized Christ Jesus as the heart of that word. As a consequence, Halley insisted that “every Christian should be a constant and devoted reader of the Bible…”

His handbook was “not designed as a textbook, but rather as a handy, brief manual of a popular nature, for the average Bible reader who has few or no commentaries or reference works on the Bible.” One reason for its success was that Henry tried to stick to the facts presented by the Bible itself and the facts of history and keep his own opinions out of the book.

When Henry Halley died in 1965, he was buried in Lexington, Kentucky. New editions of the Handbook were issued by his family.